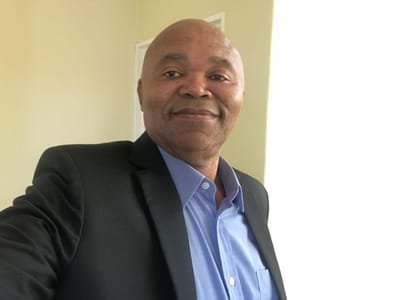 I am born of the people of the continent of Africa. The pain of the violent conflict that the people of, Liberia, Somalia, the Sudan, Burundi and Algeria is a pain I also bear. The dismal shame of poverty, suffering and human degradation of my continent is a blight that I share.
The blight on our happiness that derives from this and from our drift to the periphery of the ordering of human affairs leaves me in a persistent shadow of despair.

This is a savage road that I travelled until in 1997 when I took a decision to start a business, and work for myself and Rainbow Industrial Cleaning Service was formed. I best describe myself as a highly ethical leader, unconventional and a strategic thinker. I am decisive and I demonstrate a leadership style that is collaborative, disciplined - built on teamwork and driven by measurable outcomes. Rainbow Industrial Cleaning, started as a company responsible for the cleaning of Metro Rail trains around the Cape Peninsula, mainly from the Strand via Bellville to Cape Town.

The cleaning of the trains inspired me to form Rainbow Rail Cleaning Service, the company in my mind will only concentrate with the cleaning of trains only and that left Rainbow Industrial Cleaning Service not been active to the level that I wanted, then I decide to convert it into Rainbow Maintenance, the company that will be responsible mainly for maintenance of the roads which was a success and as the company grew I decided to form Rainbow Civils, realizing that I am now operating in the Civil Construction space.

Rainbow Civils is today the heartbeat of the Rainbow Group of Companies, with more than fourteen major Routine Road Maintenance projects, for a network of roads across the country with the South African National Road Agency (SANRAL), been the main client. The construction work on the roads under Rainbow Civils, appeared incomplete all the time without the road marking, this has inspired me to start a Road Marking company to do the road marking work after all the construction work on the roads, and Legend Road Marking was formed.

The three companies together started accumulating a fleet of vehicles between them and that came with them been involved in accidents and with the slow turnaround time on repairs of vehicles from the panel beating shops, I decided to form Legend Auto Panel, a panel beating business company in the group that is currently attending to all the vehicles in the Group when they are in an accident and this has now expanded to external business, whereby we now attend to the SA Taxi Fleet around the Cape Peninsula.

The above in the nutshell, is the Rainbow Group Of Companies that in my personal opinion has got a bright future because the maintenance of the roads is a permanent work and the painting of the roads will always be required after the road has been repaired and the taxis that in accidents will always need to be repaired after been in accidents so that they can be back on the roads to transport the commuters.